My Highlights in Vienna 2017 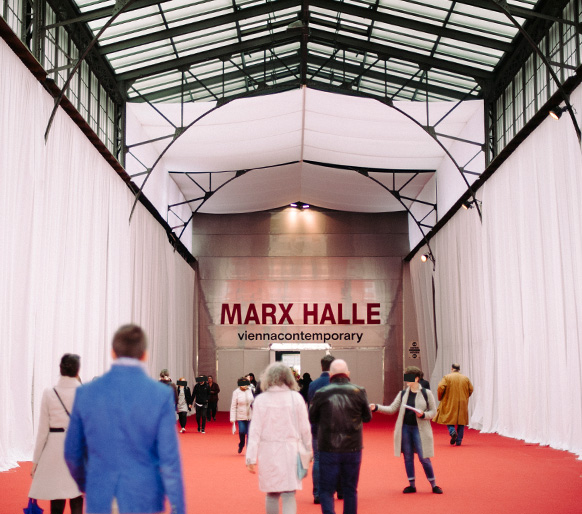 A well-balanced presentation of established artists in an easygoing-upscale location, the unique focus on Eastern European galleries, Vienna as a surprisingly relevant location and top-notch artworks ranging from fresh discoveries to international big names ... in short: viennacontemporary 2017!

The Marx Halle provides an imposing backdrop and embeds all of the happenings in a setting I would describe as elegant and informal. While proceeding through the spacious foyer I gradually enter an entirely different world – without losing an awareness of my surroundings, as I can see in the profiles of the visitors: Along with the classic art fair visitors, I notice the many young people, also families. This is exceptional for an art fair of international repute, by comparison to other prestigious locations.

Best floral decoration at a fair so far 😉

viennacontemporary has been taking place once a year at the end of September since 2012. In 2017, in the 6th year of this event, 112 galleries from 27 countries were present – approximately one-third of them from Eastern Europe, which also lends the fair its special character. In 2016 about 28,000 visitors were counted. The Artistic Director of the fair is Christina Steinbrecher-Pfandt, who grew up in Cologne and has built up a solid international network through her work experience in London, Moscow and links to the Palais de Tokyo in Paris.

Christian Eisenberger with reduced color and maximum textural effects at the renowned Galerie Krinzinger from Vienna – I find the smaller portrait-like canvases have turned out especially well. They could be interpreted as humorous or even creepy, because stylistically they resemble an identikit picture, yet hide the most important features.

KOW Berlin with a bizarre tower of loudspeakers in concrete look

One of my favorites: Enrico Bach, represented at the PIFO Gallery from Peking

My favorite artists at the fair:

Unusual for Marina Abramovic: a photographic image as an artwork. She imitates Edvard Munch‘s “The Scream” and thus brings it into an entirely new context: In the 21st century it is a woman screaming, her face marked more with resolve than terror. But this corresponds to her as a person as well.

MAM Mario Mauroner playing with an astonishing variety of textures

Thomas Arnolds with LUFT 3 has, for me, many influences from Post Internet Art.

The award-winning SEXAUER Gallery from Berlin

The most outstanding stands for me are

In my opinion, Vienna is underestimated in an international comparison of art venues especially referring to Berlin, for example – the geographical location in conjunction with the CEE focus of the exhibited art at viennacontemporary is a promising niche; the Austrian government is very interested in promoting the creative economy with powerful programs, such as “curated by vienna”, and also in generally improving networking with international curators. Artists are represented across a wide spectrum ranging from aspiring to established (Synonym: Gerhard Richter) and I find the ambiance between upscale and easygoing just right. The gallery owners were very open and helpful, which I am not accustomed to at every fair … viennacontemporary was a fab art fair!

Photos & Text: Eva Karl. Reproduction or publication of the article – even in sections – allowed only after written agreement.

More for you to explore