The Entity of Objects in 21st Century 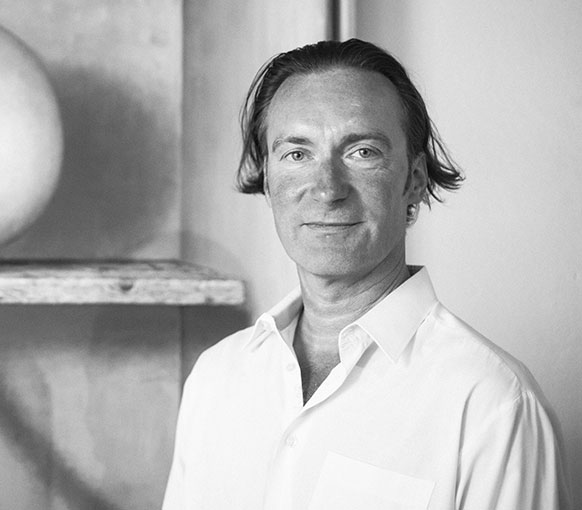 By putting together his meticulously accurate representational motifs into a conscious interaction among each other, Mirko Schallenberg carries the genre of still life into 21st century. Read here what the artist from Berlin has to say about rooms, the essence of things and Piet Mondrian.

To what extent do your direct surroundings matter?
The studio plays a crucial part if you are not a plein-air painter. As an objective painter, I first need a room for things to simply BE. I collect these objects. If you take a closer look at those roll-fronted cabinets, you will find thousands of small items that will one day occur as protagonists in my paintings.

First of all, the objects need a room – not a small room or a garage, but a quiet room. I found this place here by coincidence a couple of years ago.

I don’t have to explain my paintings. Everything is visible.

I know you said that simplicity is the most difficult thing. Can you explain simplicity the easy way?
I made everything accessible in my paintings. If there are still any questions, it only has to do with the viewer who thinks that the painter points on something specific. So the viewer does not trust his eyes. It has a lot to do with a shift towards conceptual art in the sixties & seventies: The viewer was freed from his sensual perception. My artworks are based on conceptualism, but they should not only address your thinking. I try to speak to every sense as well as streams of childhood memories and highly philosophical thoughts – which result in chaos. As a result of these sensual experiences, I try to encourage the viewer to engage himself with the fact that simple things can intertwine in a very complex way.

I intend this kind of complexity originating from simplicity.

In my opinion, diversity is a better word here than complexity. The coherences of those particular simple things are crucial – thus it is about the construction that you conceived.
Exactly. I aim to interrelate things so that they take action. I’d call it an extension of the old genre still life which makes something happen that wasn’t of much interest in earlier times: The objects of the artwork barely interacted back then because still lifes were made for matters of representation, showing modernity and power.

I want something to happen in my paintings.

I magnify the objects of the composition so that they almost appear adequately to the size of a human counterpart. As a viewer you get the physical feeling for the visual presence because if things have a certain size or volume, something particular happens. The object diverges from its concept.

As I take a close look at your paintings, I can almost feel the surfaces. Do you touch the objects during painting? How do you acquire the realistic rendering of things?
The genre of still life plays an important role in art history because it enabled a certain description of the world and reached for an innovative depiction of materiality. I asked myself what element could still touch me in this old genre – and I came to the conclusion that it was about this almost archaic materiality. I work with models. Of course, I catch up on different media, but I do not use photographs as a pattern because photographs always contain immaterial disproportions. When I start with an artwork, I have a vague basic feeling of which direction I want to go with it. I would call this a rather trivial intuition that I allow further development as I concentrate on the object. The three-dimensional object is very helpful for this kind of artistic progression. I try to translate this material aura into the painting.

I try to take the path towards the core of objects.

I choose magnification as a tool because you see something you haven’t seen before, ensuing a new consequence: The magnification lets me as a painter not only take care of the idea and the description of things – but I have to intervene differently. Eventually this is exactly what describes my paintings best, because something happens that I could not predict beforehand. For example, the brittle roughness of a multilayered gray only becomes a stone when it is spattered and dappled on top of each layer. If I see that nothing happens on the painting, like the objects do not interact with each other, they have to be replaced.

The artist is the initial audience.

And it gets more difficult to surprise me because I see a lot of images.

Do you prefer horizontal, vertical or diagonal lines in your artworks?
If you put Piet Mondrian and Sebastian Stoskopff (17th century still life painter) together, you would roughly get what I intend with my paintings – it’s the materiality of Stoskopff and the intellectuality of Mondrian. My perception of what images can illustrate nowadays oscillate between Mondrian’s crystal clear, imaginary spatiality and the cave-like spaciousness of Stoskopff.

If I look at your artwork, I always find rooms in the background. Are these rooms connected, e.g. in the same house or are they isolated rooms on their own?
The rooms are isolated which has to do with the room of things:

I refer to common knowledge of sculptors who previously put their objects on pedestals. These days they often present them on the floor. Thus I am searching for a suitable room for things. The backgrounds in my paintings cannot be stereotyped – they are fictional spaces which only become a proper composition by the correlation of things.

Which characteristics in contemporary art do you observe?
Everything has already been made and finished. In the meanwhile, we got used to the fact that the genre of painting is dead. Today, some things in art perform with the emptying of function, by depleting the meaning of objects. But I don’t need any distance from meaning in general. Everything has already been there, except when you destroy it brutally. I only get along with good images.

Do you have a set imagery for certain objects?
Neither do I use specific metaphors nor a defined iconography. There is no prescribed pictorial story except the one stemming from the object itself. You have to carefully listen to the objects in order to make way towards the core of things. I work according to this slogan:

You accomplished something exceeding the conventions of still life.
I hope so.

Browse Mirko’s website if you want to have a closer look at his mostly large-scale, square artworks. Make sure you follow his studio on Facebook: Atelier Rank + Schallenberg!

Which questions came up for you?

More for you to explore