Deprecated: __autoload() is deprecated, use spl_autoload_register() instead in /kunden/494080_90402/webseiten/ideclarecolors.com/wordpress/wp-includes/compat.php on line 502
 Two Generations – One Goal • IDECLARECOLORS 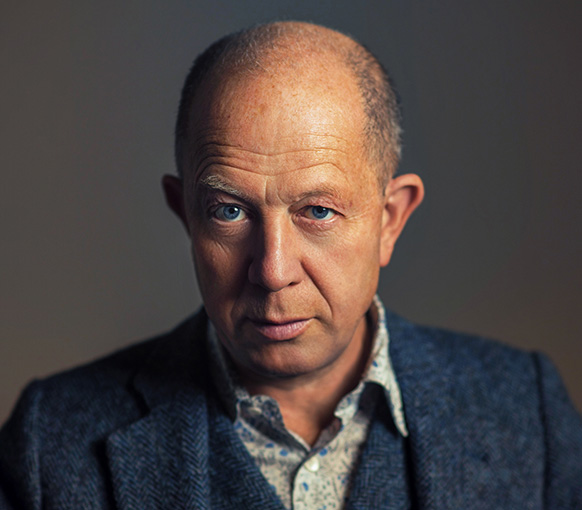 What will the gallery of the future look like? I was in Berlin visiting the gallery EIGEN + ART to ask this and other questions. Awaiting you are various perspectives from two generations with Gerd Harry “Judy” Lybke, founder and owner of the gallery and the pioneering figure behind the Leipzig School, as well as Marie Gerbaulet, director of the LAB.

Hello Eva, I’m Judy. Let’s sit down over there. What’s the subject today?

We’re talking about the gallery of the future.

We are a team and each one of us works on his special topic. Nowadays it is important that we divide up the work and give people some free space to do the things they like doing best. That’s why – apropos the gallery of the future – I’m introducing you to Marie, because she works with the Lab. We haven’t agreed on what we are going to say, this isn’t supposed to be fake (everyone laughs).

We founded the Lab six years ago. Hence, it is not a last-minute project that just occurred to us yesterday.  I had already created the Lab once before in Leipzig, when it was called the Media Lab. That was from 1994 to 1996; hence, this word and the idea behind it, had already existed before. At that time, however, we were too early; no one understood the idea of the Media Lab. The communication channels then weren’t like they are today. Nowadays in EIGEN + ART LAB, which Marie supervises – she is the director there – classic invitations are no longer printed. Instead they go through the new media like Instagram and Facebook, because these have a totally different public.

Here at EIGEN + ART invitations are still analog, aren’t they?

Exactly, you can still take flyers with you. The point is also that when we make something new, we don’t want to lose the previous clients or the existing network. Moreover, there is also this special effect of the Lab on people between the ages of 25 and 35, who go there and take a look at the art on display. Many of them perhaps buy something from the exhibited artist for €40 via an App and then also come into the gallery here, see a picture, ask what it costs. I say “€35,000” and they say then “Oh, I’ll take it, too”. Because the threshold is gone – the client has already thought about it. That’s, of course, how we generate a new collector/a new clientele.

That doesn’t mean that we generate two different kinds of quality.

Rather the claim to quality is at the same level.

EIGEN + ART here is a professional gallery, EIGEN + ART LAB is also a professional gallery – it’s just that it uses other tools, through which we are in closer, more constant contact with other people. Here we have more longer-term collaborations with artists and the strategy is also slightly different. The LAB is definitely not a young On-Off thing, which then disappears, but is rather governed by really strict professional management. We really want to push forward with it and are, I think, the gallery that has been the most consistent in developing it over several years and is most strongly entrenched in it.

The LAB has partners such as Axel Springer Plug and Play Accelerator, which no one else has; other firms also want to contribute something to the creative area. We have also developed various projects, such as “Die Wand.” (The Wall), our start-up company, where we always fill a wall with the support of the Rheingau Founders and create installations, etc. …

We try out new formats there.

To what extent in this regard do you also see a change in the clientele?

At least I see them! People come by who didn’t even know they had an affinity for art. They come, look at the art and then are totally astonished that that must also be what everybody is talking about and which they never had access to – suddenly they belong, take part and also become involved. With a great deal of enthusiasm and delight. And we also shouldn’t forget: The clientele that will follow in the next generation are also professionals in their particular areas. They also look at art under these professional aspects.  And then you can – also, or precisely then, when you do a LAB, for example, – only be a professional.

I think that the best example of this is our last exhibition with Andy Kassier. This took place only on Instagram – if people had gone to the LAB during the exhibition, they would have, metaphorically speaking, found themselves standing in front of closed doors because “Sunny Side Up” was exclusively a digital exhibition. That doesn’t mean that from now on we are only going to create online exhibitions, but we just wanted to test how it works. The opening also took place online, in that we posted a small get-together live here on Instagram. In the context of the exhibition we also sell works: You can buy a photo by Andy Kassier, but it is not printed, rather it is a JPEG file with a certificate of authenticity.

The LAB is the space for new forms, formats and platforms, with which we can get totally different people to come on board, who perhaps are just beginning to collect or are simply interested in art and find access to art through new formats. We notice that on the basis of responses from our visitors with which we are always and everywhere in personal contact. We are trying to slowly introduce this young generation to art, by building up connections to them through various formats, thus creating a personal contact.

What does the exhibition space of the future look like?

The analogue exhibition space is important and will continue to exist. I think even when projects take place online and we again and again create further digital exhibitions, the concrete location of the LAB will not be replaced …

Exactly. And will again test the stability and the idea behind it differently.

Nonetheless I am convinced that it will remain important to maintain the analogue place.

We notice on the basis of symposia, workshops and exhibition openings, which we had created in EIGEN+ART LAB, which is really a place where we can all come together and talk about art, where one can discuss and initiate discourse. All this can also take place in the Internet and naturally does, but the real location inherently still remains very important. The point is to create a link between analogue and digital – to use the one for the other. Not to replace them.

… my colleague is currently preparing an exhibition which will take place in September: We illuminate undercover the topic of “Identity”, which was also the subject of Marie’s Master’s thesis. Simplified: YOU, you – are you so, are you here or there, who are you digitally?

… It is roughly about materiality. What does the term mean today, actually still between the virtual and the real? Do we even perceive the difference? We change our bodies, which digital images do we have?

What can you say after six years of the existence of LAB; which formats have you established especially for this young clientele?

Instagram and Facebook both function incredibly well, e.g. Facebook for Events, which in the meantime is also used by the older generation. The younger generation uses above all Instagram, often Snapchat as well – the latter is, however, not really relevant for us, Instagram on the other hand has really become very important.

From which different areas do the LAB’s participants come?

Clearly there are collectors, including many young people interested in art, which are directed from the gallery to us in the LAB and also many who have heard or read about us over the past six years.

The cooperation of the LAB with people from other disciplines is also important.

For example, in January/February we worked together with a young fashion designer and thus at the opening were suddenly met with numerous fashion journalists and bloggers appearing on site. Also the cooperation with the Transmediale enticed many from the technology and scientific scene, including the associated public, into the LAB. Furthermore, some people also come again and again on a regular basis, as well as a new public from all sides.

What does this mean for the assignment of tasks in your team?

In the context of press relations, along with the previous tasks, we must now focus especially on administering and overseeing social media – to ensure that pictures and press information are positioned well there. Of course, there are still many other things, incl. Facebook- & website supervision, but those are naturally not completely new tasks. Above all, we must keep the ball rolling on Instagram and continue to capture the imagination of our followers.

How do you talk to your target audience?

No differently than usual. We will continue to publish professional texts, will not adopt the language of young people. On social media we will not try to be something we really are not. But we communicate, for example, more concisely on Instagram. There we concentrate on the WH questions: What is taking place at what time and where are we going? (both laugh)

How is the LAB integrated as part of EIGEN+ART?

The LAB creates its own individual programme, but collaborates closely with the gallery. As indicated by Judy, a feedback already exists through our mutual agreements:

The LAB is the young project space of the gallery EIGEN+ART.

When an event takes place in LAB, then all the employees of the gallery are there on site and vice versa. This is also true of how we deal with information: Everyone in the team on the various locations must be in the know about what’s going on. I think that as regards our audience both locations can be cross-fertilized by our different ways of addressing our target audience.

Leaving out the concrete examples, which you have already told me about, and now speaking just generally: How would you describe the gallery of the future?

I think the gallery of the future is already developing.

I always find it difficult to take a concept of the future as a starting point, because much is already visible now. Digitisation will continue to impact on our work processes. However, I am firmly convinced that online will never replace offline. Both will continue to exist in combination with the other.

What do you think of the idea of an online gallery?

It can function quite well! I think even more exciting ideas will be developing in this direction. Many things lie ahead of us that we can’t even imagine right now – keyword VR & AR (virtual reality & augmented reality). In the LAB many things are already happening online, but nonetheless real space is still important. I think that we can expect ever more in this area and we have to decide for ourselves as a gallery what we are going to take on board and what not to utilize, what suits us and how much digitisation we ourselves can accept.

These are, I think, entirely personal individual decisions.

In the gallery of the future much much more will be happening online.

Many thanks to the team of EIGEN + ART!