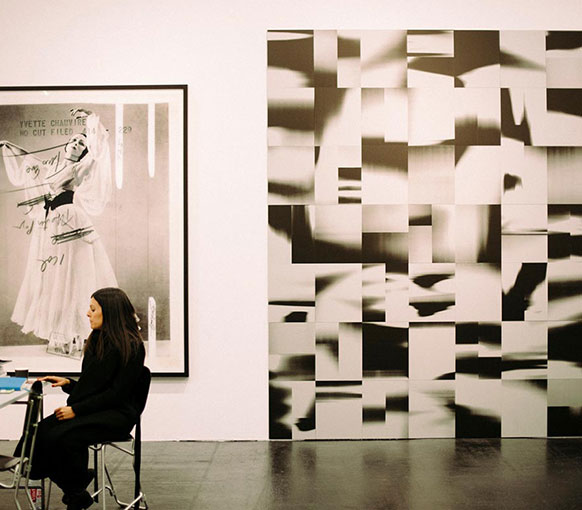 The first and thereby the oldest art fair in the world: 204 galleries, approximately 2000 presented artists and prices up to 3.5 million Euro – this is what the 51st edition of ART COLOGNE is made of. Not only, of course. Join me on my way from press conference to the galleries and get a tangible impression of the "mother of art fairs".

Despite tensions concerning the time-wise clash of Art Cologne & Gallery Weekend in Berlin, Christian Jarmuschek (Head of Galleries and Art Dealers in Germany) and Daniel Hug (Director of Art Cologne) both welcome us at the press conference while standing on the ground of a contemporary installation of the foyer in the fair hall.

From 1985 until 1995, Art Cologne was the most important art fair in the world – until it got ousted by competitors like Art Basel and Frieze. Art Cologne still refers to its local responsibility regarding the German art market, while its reputation still attracts international galleries and collectors. MCH-Group’s approach of establishing a satellite fair in nearby Düsseldorf provokes critical statements of Director Hug in terms of Art Fair “colonialism”.

Hug highlights the refreshed visual appearance of the fair that was developed in collaboration with agency boros in Berlin: “Less is more”. The revised design contains a lot of white space with a light and modern effect – which also conveys Hug’s direction of leadership since nine years with a lot of approval by the public and different media: Hug steadily brought more top galleries of the global market to Cologne – like Gagosian, debuting this year with a subtle political nod to American refugee policy.

Hug terms art as a luxury market which should still be made accessible for everyone. The renamed and redesigned top floor contains the section “NEUMARKT” for galleries less than ten years old. He also says the new connection to Berlin, where Art Cologne will enter with Art Berlin in fall is not to be seen as a response to new Art Düsseldorf which takes place in Cologne’s longly rivaled neighboring city.

So many good books …

I stood in front of this artwork for quite a while. It aligns a lot with the generation of millennials since it seems like a professionally staged selfie, full of decadence.

Everybody can use chairs – besides this unique object of an oversized rope.

You could see several space-filling installations with experimental approaches like this.

Concerning zeitgeist today: Instagram screenshots as a professional artwork. A piece of mundane everyday technology wrapped in a frame.

TV is for the dogs?! Seems like a certain evaluation of TV as a medium in general …

Chic artwork that consists of apparently incoherent abstract shaped cuttings, which still cohere as a whole.

A table and a stool in continuous movement – almost too close to the floor and each other, but still never clashing.

There were quite a few light artworks standing out.

Canvas as a medium, reimagined.

Two hand sculptures front each other, separated by a glass pane – both miss different phalanges. But when you look through the sheet of glass from one side, the missing phalanx appears through the reflection of the other hand and thus, completes it.

One of my Highlights: Galerie Brigitte Schenk’s excellently curated selection of artists from Muslim countries featuring photographs, installations with acoustic and olfactory stimuli. Artists from Egypt, Saudi Arabia, Kuwait, Iran and Iraq deal with the current complicated political climate in their home countries.

Magdi Mostafa’s Sound Installation “Extract of Paradise” consists of industrial dough mixers, continuously blending sweet date syrup and – with the sound of mixing – symbolizing the rise of the Arabic world into a modern society. The sound is fortified by microphones and additional speakers with daily noise like buzz and prayer calls.

Gagosian – debuting at Art Cologne with the installation “Buddha’s Fingers”. Old streetlights from Los Angeles emit a cozy atmosphere in the midst of the hustle & bustle of the fair. Special: Two of three exits are fenced-off, one with the American Flag. As if someone referred to the American immigration policy …

Christopher Chiappa of Kate Werble Gallery in New York not only created this space-filling installation “Livestrong”, but also works on conceptual art with a wink – I recommend having a closer look. Why is it about fried eggs? The egg itself is a symbol for perfection while a fried egg is completely imperfect – so it unites failure and perfection in the same symbol.

Regarding the latest developments within the fiercly contested German art fair market, ART COLOGNE still holds its ground as an internationally renowned fair – in a very self-confident way.